Abby was 24 years of age when diagnosed with a very rare Neuroendocrine Lung cancer which was highly aggressive in June, 2015.

What did STAND FOR do for Abby?

“STAND FOR was operating in embryonic form at the time of Abby’s illness and subsequent death,” said Georgie, Abby’s mum, “driven by Neil and his mission to help people who find themselves in dire circumstances and who, owing to trauma, lack the immediate composure to think through and address possible solutions for themselves, Neil’s timely intervention provided positivity and hope to Abby and her family following her diagnosis.”

“Abby was initially examined and treated at Bristol Royal infirmary Hospital and diagnosed with very rare Large Cell Neuroendocrine Lung Cancer,” said Georgie, “There is no doubt that the medical staff at the Bristol Hospital offered the best advice, treatment and prognosis within the framework of their prevailing knowledge and capability bearing in mind that they had never before treated anyone of Abby’s age with this type of cancer. At this stage it seemed clear that Abby’s treatment would centre on palliative chemotherapy. The prognosis can only be described as devastatingly pessimistic. 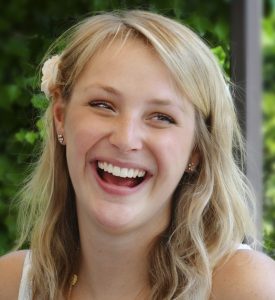 ic Lim, a consultant thoracic surgeon at the Royal Brompton Hospital, London whose determination and positivity was immediately evident. Within weeks he and other colleagues formed a ‘dream team’ of consultants and other medical practitioners fighting for Abby’s survival. Neil also arranged for her biopsy to be sent to the United States for gene sequencing in order to tailor and target her treatment as closely as possible to her specific form of cancer.

Regrettably Abby’s cancer proved too aggressive for successful management but owing to the interventions of Neil and the ‘dream team’ Abby survived for six months, and for the most part she maintained high spirits and hope of a progressively positive outcome as did we. The interventions helped Abby to remain mentally strong and during her final days to enjoy a quality of life with family and friends that she would have otherwise been denied.”

Describe what STAND FOR means to you

“STAND FOR gave Abby and all the family a level of hope,” said Georgie, “that helped her to sustain her naturally optimistic disposition and zest for life throughout her illness and substantially raised her family’s ability to cope with the tragically unfolding events that befell them. We can only hope now after our devastating loss that STAND FOR will be able to offer others similar support and comfort as ourselves.”

BACK TO THE STAND FOR FAMILY